What is it: The Acura RDX is a small sport utility vehicle that wants a seat at the grown-up premium SUV table. This SUV sits on a new platform from Acura and is the first to be a fully fledged “precision crafted performance” design language vehicle. Our example came with all-wheel drive, as well as the Technology Package and the Advance Package instead of the A-spec package, which would have replaced 19s with 20-inch wheels and other accents.

Highlights: 272 hp is delivered when the 2.0-liter turbocharged motor is spinning at 6,500 rpm. The same engine, with different outputs, does duty in the Honda Accord and Civic Type R. Torque is a stout 280 lb-ft available between 1,600 and 4,500 rpm. The transmission has 10-speeds, which is a lot. The RDX is available as either a front- or all-wheel-drive model. The latter comes with the Acura-branded Super-Handling All-Wheel-Drive, which can send 70 percent of drive torque to the rear wheels and 100 percent of that rear torque to any one side. 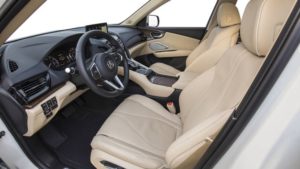 Our Opinion: Acura put a lot of weight on the third-generation RDX’s shoulders. It’s the first car with the Japanese brand’s new design language, which they call “precision crafted performance.” It’s now powered exclusively by a 2.0-liter turbo motor with a 10-speed automatic transmission. The RDX even takes the burden of being the first to try a new infotainment system interface.

Fortunately, it works. Partially because the old design was a bit in your face, this new car is a big step forward. It looks classy. Adult. Like the RDX stopped borrowing suits from its dad and went to a tailor. The wheels stretch closer to the corners, which adds a touch of athleticism to its appearance. The interior is also handsome. It also has a nice collection of soft materials and a practical layout of switchgear.

Beneath the vertical stack of buttons that make up the PRNDL, lays Acura’s new touchpad for controlling the central infotainment screen above. The Touchpad is split into two sections one large, one small. And the large pad uses absolute positioning for control, meaning the upper left corner of the touchpad is the upper left corner of the screen above, every time. It is also a button that you actually press, not haptic fakery, which is a welcome relief. Acura made the touchpad with the intension to give the operator several non-visual cues of where your finger was on the pad with the hopes of distracting the driver less.

I played with it a fair amount and found it a touch more distracting at first because of years of muscle memory built into operating other systems. But over time, as you unlearn the other ways, it works well and becomes intuitive. The biggest takeaway is that I very seldomly attempted to select one thing and something else happened. That probably deserves the biggest attaboy. You can get used to any system, as long as it bloody works!

As for power and chassis, it’s all there. Honda’s latest two-liter turbo motor is a gem. It serves well in the Civic Type R, the Accord and now here. The RDX is not a rocket ship but scoots along nicely in most any situation; getting around slower traffic on the interstate was a breeze. And when traffic calms down, the motor follows suit, keeping the cabin nice and quiet. All told, this SUV ticks a lot of boxes for a lot of shoppers.