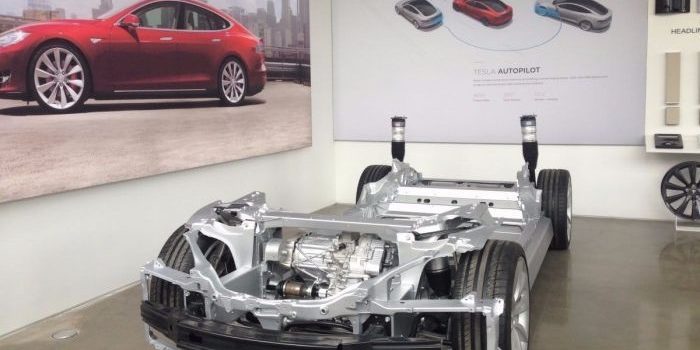 Google Chevy Bolt battery fire and you will not find a single story that says Chevy Bolt had an accident and battery caught fire. Yet, there are number of Tesla cases where the battery caught fire after an accident. Why Tesla batteries catch fire while Chevy Volt and Bolt batteries don’t. Or at least, in the case of Bolt and Volt the battery fires are extremely rare or unusual.

Today I saw a discussion in GM Electric Vehicle Owners group on Facebook, in which user Joe Reall answers the question related battery fires of Tesla vs Chevy Bolt and Volt.

“The Chevy Volt and Chevy Bolt’s batteries are far safer than the Tesla batteries that bursted into flame in the latest incident. Tesla’s Panasonic cells are made with thin metal casings so that the heat from one burning cell causes the neighboring cells to burst especially when exposed to air in an accident. The Chevy Volt and Bolt’s battery cell casings are much thicker and help prevent breaking apart due to impacts or heat and are also covered with fire retardant. Yes, the batteries of Volt and Bolt are more expensive than Tesla’s, Toyota’s, Nissan’s and Ford’s, and has heavier battery weight per unit capacity but it has saved lives and properties. So far, there have been no battery fires from Volt and Bolt in any of the accidents that they’re involved. With Tesla on the other hand, the more battery capacity it has, the more intense are the fires and more difficult to put out, although it is still rarer than fires from gasoline cars.”

As you remember about 10 days ago Tesla Model X caught fire after it hit a barrier on a California highway. Here is the post accident video so you can see the magnitude of the damage. Later Tesla revealed that the Autopilot was engaged and it actually blamed the driver (who passed away from injuries) for apparently ignoring the warnings.

“This is why we need a true solid-state battery with no volatile chemistry involved, like the eestor.us device that is now being marketed. They still have work to do to get the energy density per liter to where we need it for vehicles, but they are approaching it pretty fast from what I can tell. Plus, there is virtually no degradation after many, many cycles and it’s low cost due to the materials they are using,” replied Scott Collins, a user in the group.

In a story, by Life Science, discussing why the fire that incinerated a Tesla was such a nightmare to put out, the author writes, “what’s more, lithium-ion fires can release high levels of “toxic gases” such as carbon monoxide, soot, hydrogen fluoride, and particulates of oxides of nickel; aluminum; lithium; copper; and cobalt, according to a Tesla Model X emergency response guide. As a result, firefighters need to wear a self-contained breathing apparatus and should use hoses that spray fog and special ventilation fans that push air out at a high velocity to protect bystanders downwind of the fire, according to the guide.”

Do you think Chevy Volt and Bolt batteries are safer than Tesla batteries? What about Nissan Leaf’s batteries? Please, share your thoughts in the comments section below for discussion.